Read a story about happenings at The Next Ridge.

I've always wanted to hunt the majestic landscape of Newfoundland. From the high mountain terrain to it's rolling hills and bog-covered lowlands, this is a land is rich in history. What transpired there during my hunt would change my way of thinking forever when it comes to hunting moose in Newfoundland.

When our production crew phoned me and said that Next Ridge Outfitters was interested in hosting a hunt, I was quick to come back with a positive response. Their camps are remote with very little resident hunting pressure. Their track record is impeccable and after talking with the owners directly over the phone, I could tell that these folks were dedicated individuals. It felt like the perfect storm.

Upon my arrival we were welcomed, briefed on the hunt and carried via helicopter to a remote camp that we would call home for the next week or so. Rustic, but far from rough, was my first impression of these accommodations. From cook shacks to hunters quarters, all equipped with wood stoves, room for all our gear and a shower complete with hot water, this camp was right up my alley.

With all of the hospitality that was being offered, I thought that we might be getting the red carpet treatment because of the camera crew but I was wrong. Newfoundlanders are extremely hospitable "shirt off their back" kind of people.

Bad weather doesn't come in...it's always there, in this part, and time of year in Newfoundland. We could wake up to clear skies and an hour into our daily trek the clouds appear and the rains start coming in sideways. We fought this weather all week but it didn't slow down the moose sightings. 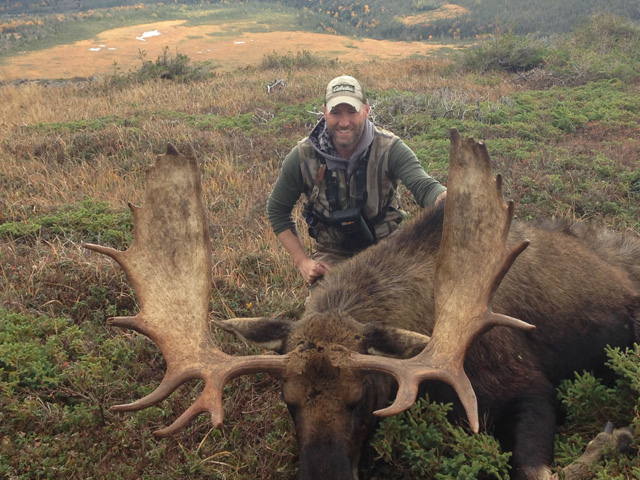 We averaged seeing 15/20 moose a day during our 6-day hunt. The numbers of moose that inhabit the area that Next Ridge Outfitters has their camps in is just incredible. Newfoundland, known for its massive populations of moose, is not typically known for giant rack bulls. But it is typically known as a place you can go and affordably harvest an excellent meat bull; fill the freezer, if you will. The average Newfoundland bull will have an antler spread between 32 and 36 inches.

During our hunt, our guide, very careful not to wear us out, was even more determined to "strike gold" than we were on some days. He navigated us even further into the back country and motivated us with every step. His determination to connect with the bull that we were looking for soon inspired our entire crew and before I knew it, we were staring down the bull of a lifetime.

Like it was yesterday, I can see the bull standing in the tuck. "Tuckamore," for those of you that haven't had the pleasure, is a nasty shrub type bush that will grab and pull you to your knees.

There was this bull, majestic in every way, with the sun reflecting on his enormous paddles. I thought to myself, "This is unbelievable!". I tried to settle my rifle as fast as I can; adrenaline rush overload. I focused in and remembered to aim small, exhaled and squeezed the round lose.

The bull dropped and my emotions redlined. We quickly approached the fallen monarch in hopes of putting a finishing round into him but the tuck was so tall we couldn't get a solid bead on the bull. Desperate to find a hole through the dense cover, we moved even closer and the bull decided to take his last stand and somehow get to his feet. In a second, this 1200 pound animal is up and on the run. Mortally wounded the bull managed to raise up above the brush and at a distance of only 30 or 40 yards, I was able to put another round into him and watch him crash for the last time.

We spent a few hours that afternoon with meat preparation and picture taking for sure. The bull was tremendous in every way and had antlers that reached a spread of 53 inches. Here I am, in the high country, literally on the top of Newfoundland and I'm looking down at what could easily have been mistaken for an Alaskan/Yukon moose.

Overall, this adventure ranks high in my book of "must do" hunts. I left Newfoundland a changed man when it comes to my take on this classic moose hunt. For those of you who dream of a giant moose to hang on the wall and to put in the freezer but think Alaska/Yukon is the only place to do it...think again.

The Alaskan/Yukon moose hunt would be incredible, no doubt, but if paying twenty something thousand dollars isn't in the cards for you...trust me when I say this, pick up the phone and call Shane and the crew at Next Ridge Outfitters, tell him you heard my story and ask to be placed on his waiting list!!!

With any luck, you might just end up in camp with me and the EDGE crew. 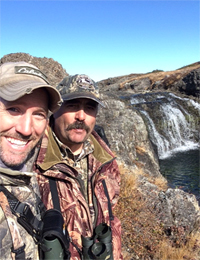 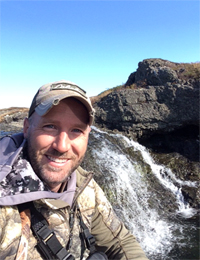